The CO2-Performanceladder is a procurement tool to encourage companies to be aware of their CO2 emissions (and those of their suppliers), and to be permanently on the lookout for new ways to save energy, use materials efficiently, and to use renewable energy. It encourages companies to actually carry out such measures and to share the knowledge they have acquired in the process, and to look for yet more ways of cutting emissions, with colleagues, research institutes, NGO’s and government bodies.

The instrument is part of the ambition to introduce a limited set of instruments for sustainable procurement, that can be used by every major commissioning party in the Netherlands. The instrument can be used by public sector organisations and private sector companies in (complex) calls for tenders. The principle behind the ladder is that effort is rewarded: a higher score on the ladder means a concrete advantage in the tendering process, in the form of a nominal discount on the tender price.

The CO2-Performanceladder was originally developed by ProRail, the Operator of the Dutch railway infrastructure, and has been used for tenders in the railway industry since 2009. However, it quickly became apparent that other commissioning parties saw the potential of the ladder as well.

This is why version 2.0 of the CO2-Performanceladder has been developed. It can now be applied more broadly, for other organisations issuing tenders and in other sectors. The ladder is now fully compatible with European regulations and the Public Procurement (Tendering Rules) Directive.

The CO2-Performanceladder operates on the basis of two important principles: attaining the best possible practical results and maximising innovation, and a minimal restriction of the operational activities of companies. The ladder does not seek to regulate production methods or product standards, but actually creates greater scope for creativity and the renewal of company processes and products. The ambition is that for companies who allow themselves to be registered on the ladder to regard it as investment, the return on which comes in the form of reduced energy consumption and less use of materials, for example.

The CO2-Performanceladder rewards concrete improvements in the CO2 performance of companies as a whole, which is appreciated by many parties. It stimulates the private sector to incorporate CO2 awareness in the way it organises its activities.

The level which a company has reached in reducing its CO2 emissions is described as a so-called ‘award advantage’. It has been decided that an award criterion should apply because the degree of environmental harm (as an environmental feature) involved in the carrying out of a project represents an economic value:
the higher the level on the certificate, the greater the advantage for the company in the award weighting.

In the case of awards based on ‘lowest price’, the award advantage means a nominal discount of a certain percentage of the tender price. In the case of awards based on ‘the most economically favourable bid’, the price component in the score is modified by the percentage of the award advantage. It is up to each individual commissioning party to decide the applicable nominal discount for each level on the CO2-Performanceladder. This can be seen in the tendering documentation.

Where a consortium of companies is taking part in a tendering process, as is often the case, the award advantage is determined by the lowest CO2-Performanceladder score of the individual companies involved.

The CO2-Performanceladder uses a methodology that is based on the Capability Maturity Model (CMM). The CMM states that the execution of each project and the way in which processes are managed, are at a certain stage of maturity. The model distinguishes five maturity levels. A company can reach the next level through incremental improvements in its existing processes, and through innovations in technologies and methods.

In the CO2-Performanceladder, the CMM has been categorized into five levels, numbered from 1 to 5. A fixed set of requirements has been defined for each level, with which the CO2 performance of a company and its projects must comply. These requirements are founded on four aspects – A, B, C and D – each of which has been given its own weighting. The position of a company on the ladder is determined by the highest level to which it meets the requirements.

Below, the CO2-Performanceladder is shown in diagrammatical form. 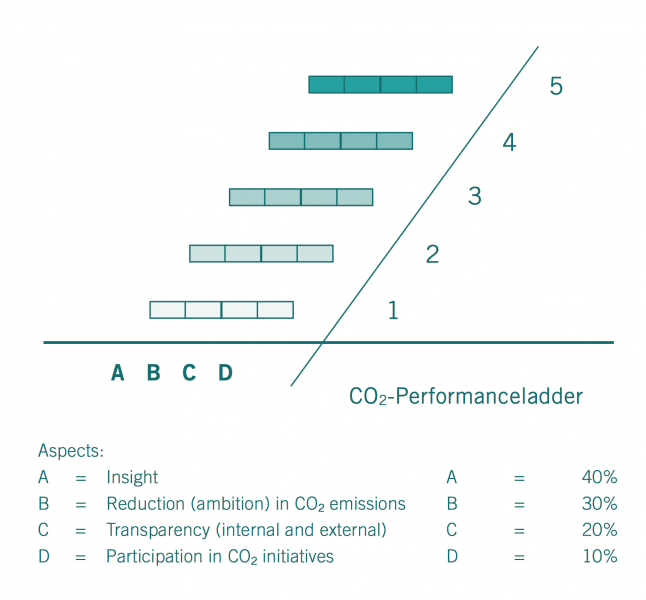