Barco reaches first target to reduce carbon footprint of own operations one year in advance & strengthens its ambition by committing to the Science Based Targets initiative.

Since 2015 CO2logic and Barco have teamed up to strive for more sustainability. After a base line calculation for 2015 Barco and CO2logic established short term targets for their own emissions to reduce emissions by 20% by 2020. Now, Barco & CO2logic are proud to announce that these targets are met, one year in advance! Barco did not wait to further strenghten their ambitions regarding sustainability and teamed up again with CO2logic to set Science Based Targets in September 2020.

Own emissions target: 1 year ahead of time!

In 2016 Barco and CO2logic performed a deep dive analysis of the own operations CO2 emissions and set an ambitious target to reduce these by 20% compared to the baseline 2015 (tCO2e/turnover). This target was achieved by reducing the footprint on three different fronts. (1) A shift from transporting goods by air to maritime transport was implemented, resulting in an impressive -19% relative footprint for the logistics department. Furthermore (2) mobility emissions were strongly reduced by reducing business flights & car travel and (3) infrastructure emissions were drastically released by, amongst others, increasing the % of renewable energy at Barco production sites. 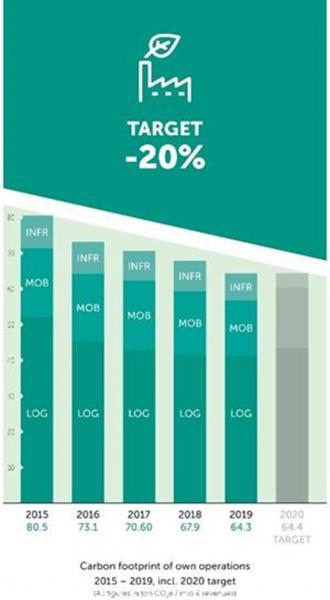 Next mid and long term objectives

After obtaining these targets, Barco and CO2logic teamed up again to analyze possible next, even more ambitious targets, which resulted in participating in the Science-Based Targets initiative. Science-Base Targets is the reference scheme to set reduction efforts in line with the the Paris Agreement, to limit global temperature rise to 1.5°C above preindustrial levels for the best chance of avoiding the worst impacts of climate change. This way, Barco joins the global movement of leading companies. “The good results achieved in recent years for sure is a great way forward in this process,” says Jan De Witte, CEO of Barco. “It clearly shows our ambition to reach our targets and establishes our leading role in the switch to sustainable business conduct. Sustainability is now an integral part of the Barco DNA.”

The detailed press release by Barco regarding these targets can be found here.